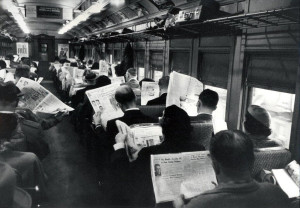 As a small business owner, every dollar spent for marketing has to be a dollar well spent. That takes research, planning and a well thought overall marketing strategy. Where are your customers going for information? How much time are they spending there? And what is your return on investment when marketing on different media platforms?  Some of this data will be based on research and some on trial-and-error experimentation.

I’ve put together some research about social media marketing vs. newspaper marketing. In future blogs, I will compare with Radio, TV and special publications but as newspaper marketing appears to be the least expensive in that category and the most accessible for small businesses, let’s start there.

How many of us read the newspapers daily? 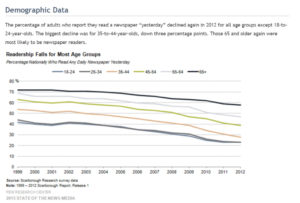 “Today, just more than half of Americans (54 percent) read a newspaper during the week, somewhat more (62 percent) on Sundays, and the number is continuing to drop.  Overall, some 55 million newspapers are sold each day, 59 million on Sunday. At the same time, the number of newspapers in the country has been on a steady decline for even longer, dropping nearly 1 percent a year for now two decades to 1,457 in 2002.

By 1990, however, even the boost from a growing population was not enough to maintain how many newspapers were sold each day. Circulation began dropping at the rate of 1 percent every year from 1990 to 2002. By 2002, weekday circulation of U.S. newspapers had dropped 11 percent in 12 years.* – The State of the Media

The percent of Americans who say they read a print newspaper the previous day continues to drop, falling 18 points over the last decade to 23%. (Pew Research Center 2012)

How many of us visit a social media platform each day?

Worldwide, there are over 1.55 billion monthly active Facebook users which is a 14 percent increase year over year.  Total number of Facebook daily active users are 1.038 billion. On Twitter, there are 100 million users that login daily.  Pinterest has 47.66 million unique visitors from the United States alone in July 2015. Instagram has over 400 million active monthly users, with 75 million visiting daily. 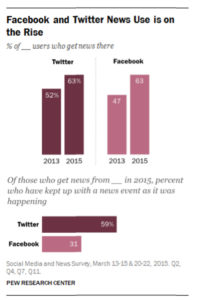 How engaged are Newspaper Readers?

“We can’t track how long readers are spending with their print version, but regarding digital visits, they last an average of 3 minutes.  The average visit to The New York Times’ website and associated apps in January 2015 lasted only 4.6 minutes – and this was the highest of the top 25.

Thus, most online newspaper visitors are “flybys,” arriving perhaps through a link on a social networking site or sent in an email, and so may not think of this experience as “reading a newspaper” but simply browsing an article online.” – Journalism.org

How Engaged are Social Media Users?

The following are statistics from a 2015 Pew Research Center study:

How much ad revenue is being spent on newspapers?

For the past five years, newspaper ad revenue has maintained a consistent trajectory: Print ads have produced less revenue (down 5%), while digital ads have produced more revenue (up 3%) – but not enough to make up for the fall in print revenue. Overall ad revenue fell 4%, to just $19.9 billion. (Pew)

How much ad revenue is being spent on social media?

When Facebook launched its first advertising option in May 2005, no one could have predicted that social media advertising revenue would be estimated to reach $8.4 billion in 2015, just ten years later. (Marketing Tech)

Social media advertising is a market that did not exist just a decade ago, but is projected to generate $11 billion in revenue by 2017. This is up from just $6.1 billion in 2013.

What does an average newspaper ad cost? 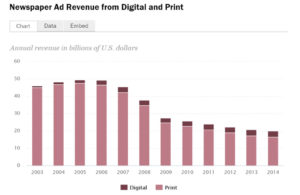 Here’s the formula: For a full page advertisement, the newspaper advertising costs per thousand typically ranges from $80 to $130 for a full page advertisement. For a simple estimate, $100 is good estimate.  Lets use these numbers to estimate how much running a ¼ page ad in a sample circulation paper (in Vermont) would cost. The paper has a circulation of 31,000.  31 x 0.25 x $100 = $775.

How much does an ad cost to reach 31,000 in the same market on Facebook for one day? The cost would be $110, and that ensures it will show up and be viewed by 31,000 users. There is no way to ensure that your ad will be viewed by human eyes on all 31,000 copies sold. In fact, a very few percentage of users actually read or even see their specific ad, as they are looking for top headlines of the day, editorials, even classifieds, so there is no guarantee the section of the newspaper where your ad is located might even be touched at all.  That a huge risk for $775 average cost, a 700% increase in your marketing cost.

I called several local area newspapers to get a price for 1/4 page ad on a weekday:

What does an average social media ad cost? 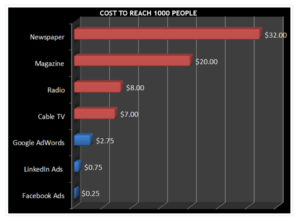 On average a budget of just $30 per month can reach 4000 more people, and that is a specific 4000 users, that you’ve chosen the demographics specifically for based on region, age, gender and interests. You cannot select your audience with newspaper, TV, or radio ads so there is no way to pinpoint your marketing dollars to be spent on your specific target audience.

As Moz.com brings out what makes Facebook and now other social media ads so unique in today’s market:

If you have a large budget for a consistent newspaper campaign (and it will have to be consistent to be effective); you’ll see a greater reach with a regular campaign than a one-time ad as most newspaper salespeople will tell you.  Also, if you’re advertising a large promotion or event (a going-out-of-business sale, a huge clearance, or a store opening) rather than just introducing your brand to the public, you also may see a benefit to a week of newspaper ads.  And if you’re trying to reach an older, more mature or even more educated demographic, there may be benefits to traditional print marketing considering the region you’re located in. Again, if your budget allows.

*The real rate of circulation decline could be even greater. The Audit Bureau of Circulations changed the way it counted circulation to include bulk sales of papers to places like airlines and hotels for free distribution. These sales are technically “bought” by the hotel or airline, often through a barter exchange, but can make up a significant part of total circulation. For example, 46 percent of USA Today’s circulation – 987,670 papers – comes from bulk sales.6 And the ABC rules have been liberalized in other smaller ways through the years, masking even further the true extent of circulation loss, according to Rick Edmonds at the Poynter Institute who has examined this closely.7